Canada opened its door to more than 40,000 immigration applicants in January.

If the first month of 2019 was any indication, Canada should have no trouble achieving its goal of welcoming one million immigrants by the end of 2021.

January saw the Government of Canada and provinces across the country open the door to more than 40,000 potential applicants through key economic immigration and family sponsorship programs.

Both economic immigration and family sponsorship are central components for Canada’s new three-year immigration levels plan, which has a target of 331,000 new permanent residents for 2019.

This number is set to rise to 341,000 in 2020 and reach 350,000 by 2021 — nearly one per cent of Canada’s population. A one per cent immigration rate is considered vital for ensuring the continued growth of Canada’s labour force and economy in the years ahead. 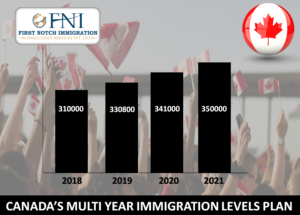 The majority of these new arrivals are expected through Canada’s various economic immigration programs, namely those managed by the federal Express Entry system and Canada’s Provincial Nominee Program.

January saw the Express Entry system get off to its biggest start ever, issuing 11,150 invitations to apply for Canadian permanent residence.

Invitations are based on a candidate’s Comprehensive Ranking System (CRS) score, which considers factors such as age, education, work experience and proficiency in English or French.

To find out if you are eligible to enter the Express Entry pool, contact First Notch Immigration.

📧Mail us your query: enquire@firstnotchimmigration.com