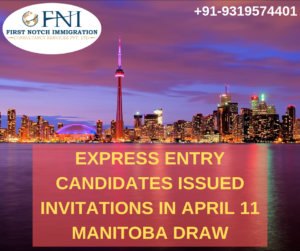 The Skilled Workers Overseas stream is a key component of the Manitoba Provincial Nominee Program (MPNP), which allows the province to nominate a set number of economic immigration candidates for Canadian permanent residence each year.

The April 11 draw issued 352 invitations to two groups of candidates, including an unspecified number with a profile in the federal Express Entry system.

Express Entry candidates with a provincial nomination from Manitoba obtain an additional 600 points toward their Express Entry ranking score and are effectively guaranteed an invitation to apply for Canadian permanent residence.

To be considered for a provincial nomination from Manitoba, Express Entry candidates must submit a separate Expression of Interest (EOI) profile to the MPNP.

Eligible EOI profiles are ranked based on scores awarded for factors that include education, work experience and a candidate’s connection to Manitoba. The highest-ranked candidates are then invited to apply for a provincial nomination through regular draws from the pool.

Express Entry candidates invited in the April 11 draw were required to have a valid Express Entry ID and job-seeker validation code, and at least six months of recent work experience in an occupation listed as in-demand by the MPNP.

The other group met the following criteria:

The lowest-ranked candidate in these two groups had a score of 561.

The April 11 draw also issued 51 invitations to candidates through one of the MPNP’s Strategic Recruitment Initiatives. These include overseas recruitment missions conducted by the MPNP in association with Manitoba businesses.

The lowest-ranked candidate invited through a Strategic Recruitment Initiative was 695.

To find out if you are eligible for any Canadian immigration programs, contact First Notch Immigration Today!